If you’ve spent any time in the Alps in the spring or summer, you may have heard people talk about Marmottes, hang off charlifts attempting to see them and listening out for the distinctive marmotte call. If you were the poor French lady in the bubble lift with me last July, you’ll also have heard my questionable impressions of these beautiful animals. It’s more than likely if you’ve spent time here in the summer that you’ve heard their call and possibly not known what it is, or maybe you are in awe of them as much as me, or maybe you’ve never even heard of them, so here’s a bit of information on those infamous little creatures who dominate our minds and, apparently, are everywhere.

I originally wrote this on a Friday, contemplating the fact that Marmottes are in abundance in The 3 Valleys, and reflecting how unlucky it was that I hadn’t seen any close-up. As such, I had included images here sourced from other places, from people who had been lucky enough to see them in a range closer than about 500m!

The very next day I took a walk from Pralognan to the Refuge de la Vanoise, and, would you believe, after 3 years of looking out for these beauties, I finally got within feet of some Marmottes! 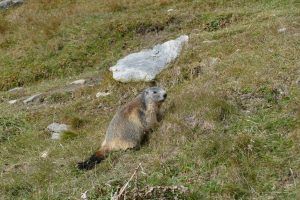 As normal, I spent the whole walk listening out for their call and stopping dead when I heard one which, I’ve got to be honest was pretty frequently so the walk took considerably longer than it should have.

Some fun facts:
– Alpine Marmottes are a mammal who burrow (when walking you can often see their little burrow holes as an extra taunt!)
– In Quebec they’re called the ‘siffleux’ which translates to ‘whistle’ because of the sound they make to alert others of danger.
– They’re generally 46-66cm with a weight of 2-9kg.
– They live from 4-8 years in freedom.
– They are ‘caecotrophic’ which means they digest their food twice by ingesting some of their own droppings – suddenly less cute in my eyes?
– Hibernate for 5 and a half months whilst skiers dominate the mountain. 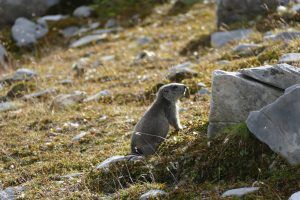 So why the obsession?

I walk a fair bit, and am generally quite ‘out and about’ so do see lots of wildlife, but these little fellas just evade me constantly. Last summer I sat on the chairlift with friends visiting from England searching and searching with no luck. At the top we bumped into another friend; ‘Did you see the Marmottes?! Three of them!’
THREE!!

The truth is, for me, they’re a local animal who are not easy to come across, making them a special sighting. They go about their daily lives sharing our home with us and living every day trying to avoid the surplus of birds of prey, and, apparently, my camera. One thing I learnt from finally seeing them this week is that the whistle is there for a reason, they do scamper pretty quickly on hearing noise or movement. The same with most animals, the Marmottes that we came across in the middle of the valley and miles from civilisation were a lot less comfortable with our presence than the Marmottes who were living near the refuge and were obviously used to humans being around. 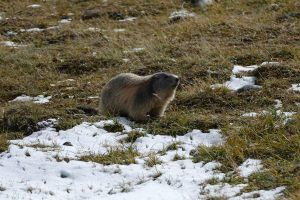 The Whistle is easily mistaken as a bird call if you don’t know what to listen out for, emitted by the Marmotte who has been nominated to take watch. I think it sounds a little bit like a high-pitched single-tone crow call, so whilst it is distinctive it can be hard to ascertain what is calling out to you!

Generally, they sit on the top of a rock and watch out for predators or general danger, at which point they whistle to alert others, who then scamper off into their holes. Interestingly, they have different whistles for different alerts, from air predator to land danger. One of the things that makes them so tricky to see is the fact that, as you can see, they are a similar colour to the rocks they sit on and they sit remarkably still!

The best time to see them is first thing in the morning, or if you’re walking far away from towns or villages. When you hear the call, stand impeccably still and try and spot them.

If you have seen a Marmotte, feel free to tag us in your photos on Instagram or Facebook, we’d love to see them, and feel sorrow at the lack of sighting in our life!

What’s on this summer in Val d’Isére

A Daytrip to Annecy